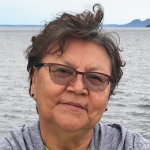 In “Gkinoowmaawso Waaseyaa,” Barbara Nolan shares with us a story of a bright, young, five-year-old girl named Waaseyaa. Waaseyaa’s father, Bgonehaankwad, and Waaseyaa’s mother, Waaskonens, have become frustrated with Bgonehaankwad’s elderly and increasingly accident-prone father, Mmaangzid, who lives with all of them in the same house.

Bgonehaankwad and Waaskonens have nearly given up on the clumsy old man, Mmaangzid, and are no longer wanting the Elder to be included as a full member of the extended family. However, the five-year-old Waaseyaa, understanding the importance of loyalty to extended family, has other ideas.

Waaskonens, a single thirty-something elementary school teacher, is quite content and happy with her life – with one exception. She feels a deep loneliness in her heart because she longs to be a mother. She wants to raise a child of her own without having a man.

An opportunity presents itself one day to Waaskonens to adopt a baby. Should I take this chance and risk rejection by the adoption agency? Will I be a good mother? These are just some of the questions concerning adoption that Barbara Nolan raises in “Waaskonens Daapnaan Binoojiinsan.”

We make mistakes. Accidents happen. And, sometimes these accidents have tragic results. In “Boonenndizwin”, Barbara Nolan gives us a compassionate glimpse into the heart of a loving brother who has made one such tragic mistake. How do we face our family after our error has caused them such suffering? How do we return to our community after our actions have resulted in profound loss for the ones we love? And, perhaps most importantly, as the brother in this video wonders, how do we forgive ourself?

While driving a cab to earn some extra cash, Mtigwaab learns much from one of his passengers, an old woman. She is filled with gratitude for the life she’s led as she calmingly accepts her impending death. In “Bemoozhwed,” Barbara Nolan encourages us to examine the many experiences we’ve enjoyed during our life. As Mtigwaab’s elder passenger suggests to him, perhaps our gratitude for our pleasant experiences can indeed help us to better accept other events in our life which are not so pleasant.